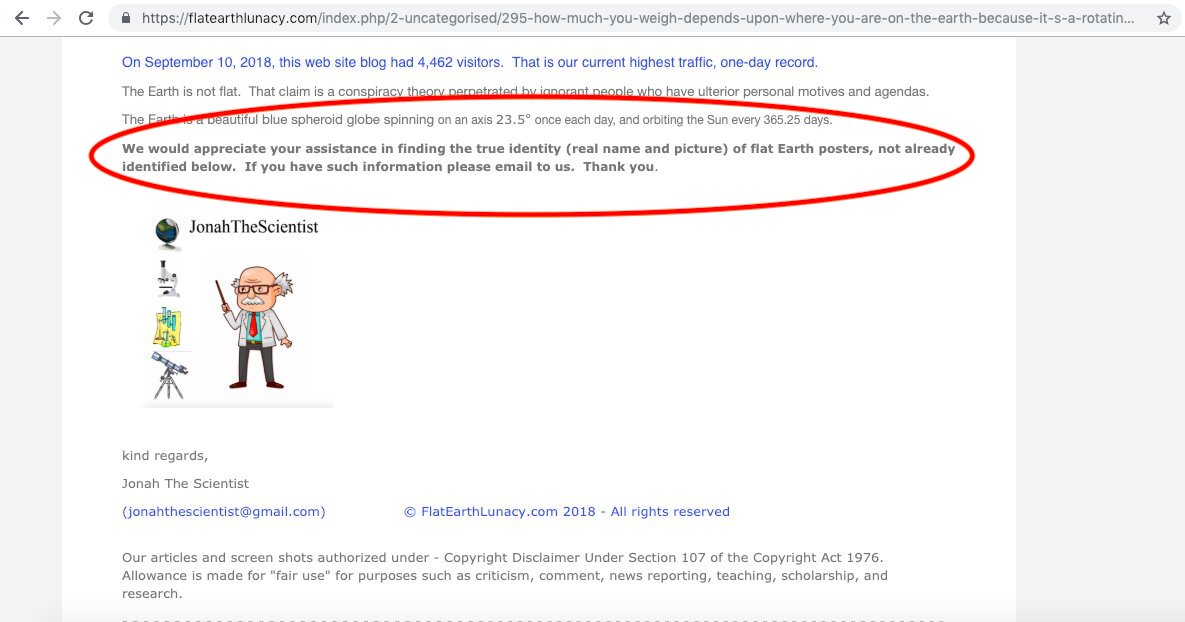 Jonah the Scientist runs a website called flatearthlunacy.com where he challenges the Flat Earthers. He has a standing request on his website which reads as follows:

We would appreciate your assistance in finding the true identity (real name and picture) of flat Earth posters, not already identified below. If you have such information please email to us. Thank you".

I have also run into other places on the internet where Jonah the Scientist can be seen attempting to collect the private information of others: 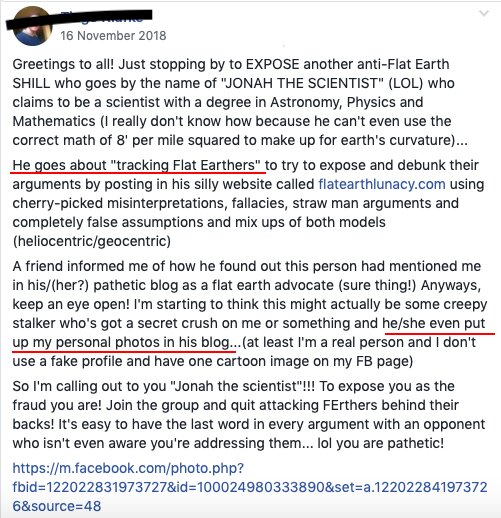 Clearly, Jonah had not been given permission to publish this person's personal photos.

I emailed Jonah the Scientist asking him why he is requesting, collecting and publishing the private information of Flat Earth posters merely because he does not agree with them - attacking the Flat Earth theory itself is easy enough without having to doxx its proponents.

I also asked Jonah the Scientist why he does not publish his own personal and private information (considering he seems to be very comfortable with publishing that of others).

Jonah the Scientist claimed that he only publishes information on others that is already public, but did not explain why he then still needed to call upon his audience to assist him in finding the "true identity (real name and picture) of flat Earth posters".

However, Jonah the Scientist did explain that he does not wish to publish his own identifying information for fear of the following:

Jonah the Scientist also claims to be "a scientist with college degree [sic] in Astronomy, Physics and Mathematics", but fails to provide proof of his credentials and academic qualifications.

According to Jonah the Scientist "everyone is entitled to have their say", so here is mine.

The purpose of this page is not to bully, harass or bring harm to Jonah the Scientist or anyone in any way afiliated with him: I do not condone, nor do I engage in doxxing. Rather, it is to illustrate that Jonah the Scientist is fully aware of the consequences of seeking and publishing the "true identity (real name and picture)" of anyone on the internet who has not already made that information public (such as himself).

All screenshots and other attachements are authorised under the Copyright Disclaimer Under Section 107 of the Copyright Act 1976: Allowance is made for "fair use" for purposes such as criticism, comment, news reporting, teaching, scholarship, and research. Fair use is a use permitted by copywrite statute that might otherwise be infringing. Non-profit, educational or personal use tips the balance in favour of fair use.